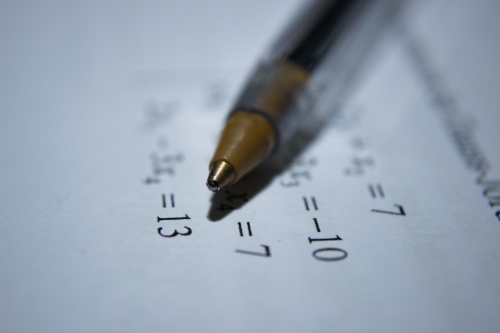 What is the 173rd digit to the right of the decimal point in the standard decimal expansion of 234567/7 ?

Then, divide the total number of digits the question asks for by the length of the sequence 571428 (the number of terms in this sequence is 6) : 173/6

Thus, the answer is the 5th digit in the sequence: 2. ANSWER B

Keep in mind that finding patterns is an important part of the GMAT. During our classes we go into more detail about finding patterns, and how do deal with remainders which would make this question easier.

If x, y, and z are positive integers, is the sum of x and y divisible by 3?

they’re divided by 3) must be equivalent to 0 upon division by 3.

Statement 1: gives no information about y, and so is clearly Not Sufficient

Statement 2: gives no information about x, and so is clearly Not Sufficient

Statements 1&2: if both statements are true, this means that x and y have the remainder

If that remainder = 0, the answer is yes

If that remainder = 1, the answer to the question is no

Answer B is correct.  The focus of the first paragraph is to show why Europeans acquired colonies and what these colonies usually did.  Then the author goes on to show why the colonies in the Philippines where an anomaly or an abnormality.  Therefore, B is not wrong but it’s a good idea to check that the other answers are not right.

Answer A is incorrect.  While the passage may seem confusing upon first glance, the policy that Spain followed is clear, they focused on commerce in the colony and they wanted to hold on to the area.  What is not clear is why they wanted to hold on to the colony because at the time it was unusual or abnormal for a colony to be used for reasons other than agriculture and mining.

Answer C is incorrect.  Here the author doesn’t really clarify why the Spanish did what they did.  He said that “perhaps” the Spanish held the Philippines for religious or strategic reasons but we aren’t told for sure.

Answer D is incorrect.  The passage does talk about the priorities economically speaking for most colonies, but this information is used primarily to show how odd the Spanish colonies in the Philippines were compared to most colonies.

Answer E is incorrect.  The example that is shown is not hypocritical, but rather just different from what is expected.

Answer C is correct.  At the end of the passage we are told that the non-mercantilist reasons of religion or strategy were perhaps why Spain held the Philippines.  The Philippines having a unique military interest is therefore one possible strategic reason to keep the islands.

Answer A is incorrect.  This answer is simply stating a fact: religious beliefs were usually incompatible with colonial objectives.  This answer does not show us what we would expect to be true based on the decision to hold the Philippines. For example, we would possibly expect that the Spanish wanted to convert the native people for religious reasons.

Answer E is incorrect.  Planning on moving away from an agriculture-based economy could be one reason for holding the Philippines, but there is nothing in the passage to suggest that we could expect that the Spanish where planning on doing this.

Answer A is correct.  In the passage we are told that mercantilist colonization revolved around the accumulation of precious metals such as, but not limited to, gold and silver.  Iron could also be considered a precious metal and therefore A is not wrong.  Here again though, it would be good to eliminate the other answer choices to make sure it’s the right answer.

Answer C is incorrect.  The passage does say that agricultural and/or natural resource acquisition would be evidence of a successful mercantilist colony.  However, this answer talks about innovating a revolutionary agricultural process, no acquiring new land.  Therefore, it is incorrect.

Answer D is incorrect.  While Spain may have kept the Philippines for religious reasons, the passage does not say that this would be the best evidence of a successful mercantilist colonization.  In fact, many mercantilists wouldn’t consider this successful at all.

Answer E is incorrect. Spain may have kept the Philippines for military reasons, but the passage does not say that this would be the best evidence of a successful mercantilist colonization.  Instead, mecantilist generally focused on mercantilist the accumulation of precious metals and of natural resources.

Example: It is commonly accepted that socioeconomic status (SES) plays a role in language development. As a general rule, children of lower-SES families have less-developed vocabularies and lower language proficiency scores than do children who are raised in more advantageous situations. Yet new research suggests that SES is not the most important factor in a child’s language development—rather, it is whether parents actively talk to their toddler or not. Raising children with better language processing efficiency and stronger vocabularies has almost nothing to do with SES, then; parents simply need to talk directly to their toddlers.

Which of the following, if true, casts the most doubt on the effectiveness of the conclusion drawn above?

This question asks us to weaken the argument: “Raising children with better language processing efficiency and stronger vocabularies has almost nothing to do with SES, then; parents simply need to talk directly to their toddlers.” This argument is drawn from research stating that parents actively talking to their children is a more important factor in language development than SES is. However, we don’t know if these two factors are in any way related. Answer A addresses an issue that might arise in our heads while reading the question, of whether TV might be a substitute for talking directly with children. This issue is not raised in the passage, though. Answer C might confuse us into thinking that bilingual parents would speak to their children more than monolingual parents, in which case it would cast doubt on the statement; but we know of no difference between the amount bilingual parents speak to their children. Answer D provides a weakening argument, but only if we assume that having fewer children means that their parents have more time to devote to speaking to each one. Because this isn’t given, we must reject D. And Answer E increases the scope and introduces a line of argument related to reading, which is tangential to the statement. We choose Answer B because it shows that SES is strongly correlated with the amount of time parents spend with their children, during which they would have the opportunity to speak to their children, and thus weakening the argument that SES has almost nothing to do with language development.

Example: Nazi occupying powers in Eastern Europe practiced a policy of collective punishment, destroying entire villages for acts of sabotage even though all their inhabitants did not participate in them.

A. all their inhabitants did not participate in them

B. not all their inhabitants participated in them

C. all their inhabitants may not have participated in them

D. not all their inhabitants would have participated in them

E. all their inhabitants were not participating in them

To structure a sentence like this, ask yourself which thing should take the negation. It’s rather awkward and confusing to introduce a group of “all” people and then try to explain that some people do something and some do not by negating the verb (“did not participate”). In this case, it’s better to negate the subject of the phrase “not all their inhabitants” and leave the verb alone.

A. This is confusing. Did none of the inhabitants participate or some of them?

C. This repeats the same mistake as the original, but use of the present perfect tense is incorrect.

D. This puts the negation in the correct place, but use of the conditional is incorrect.

E. This repeats the mistake of the original and there is no need to use the past continuous tense.